Iowa Select was founded with a culture-centered ethos that blends the best of player development with an emphasis on team concepts. Welcoming players who believe they can thrive in a family environment, Iowa Select strives to offer excellence through a training-first vision built on a supportive and challenging framework. Through hosting club tournaments as well as adult leagues and clinics, our year-round programming welcomes all athletes at all age and development levels to the Volleyball Factory.  Whether players participate in our Youth Program, through our Academy Development Teams, attend our camps and clinics, or are invited to join our travel teams, we strive to meet players where they are on their skill journey. While Iowa Select pledges to assist every player in meeting their volleyball goals after high school, above all else, we seek to help all players grow in leadership, cooperation, and confidence and to apply the skills in their lives beyond sport.

The story of Iowa Select Volleyball Club is a fascinating one, which holds a tremendous amount of history and success. Before Iowa Select, it was Stars & Spikes. Read more about the history of our club below.

The beginning of Stars and Spikes

Stars & Spikes Volleyball Club (S&S), started back in January of 1996 as a small local school-based club program, servicing Central DeWitt Community School District under the leadership of Greg Weller. The very first year, S&S had only one 13s team and one 14s team.

S&S took a huge step in January of 2008 and became a National Qualifying program, selecting some of the best volleyball players in the Quad-Cities area, eastern Iowa, and western Illinois.

Also in 2008, Kyle Condon was beginning his freshmen season at St. Ambrose University. Condon starting getting his feet wet into the coaching world, coaching as an assistant at Assumption High School. Frank Flanagan was just starting his freshmen year at Serra High School (Gardena, CA), where he would just start playing volleyball competitively for the first season.

S&S has their first team qualify for GJNC

In 2010, after only their third elite season, the S&S qualified their first team (15s) for the Girls' Junior National Championships in Reno and finished 38th.

Also in 2010, Condon entered his Junior season at St. Ambrose University, while also coaching his first season at Assumption High School. Condon’s SAU team that year went 26-7 falling short in the national semifinals. Flanagan was just getting ready to start his senior season, and participating in his 3rd club season with Beach Cities Volleyball Club, the only club he played for throughout his club career.

S&S has another team qualify for GJNC

Condon was the Head Coach of the 16’s S&S team, and then began his first year as the Head Coach of Assumption High School. Flanagan had just finished his Sophomore season at El Camino Junior College where he led the state in assists and finished 3rd in total digs (1st among all setters). He soon accepted an Athletic/Academic scholarship to attend St. Ambrose University under the leadership of Bill Gleeson. Little did Flanagan know that the Quad Cities would be where he would meet Condon.

Condon had just coached his Assumption team as a Head Coach to the Iowa Girls State Tournament (the first year Assumption qualified for the state tournament).

Flanagan had just finished his first season with the SAU men's team, where they finished 21-10, just missing the national tournament. Flanagan subbed as a coach for Condon’s Assumption feeder school program that spring, and connected for the first time in the QC volleyball scene.

S&S send athletes to play at the collegiate level

Finally in 2014, the S&S qualified two teams for the GJNC in Minneapolis.

Condon was entering his last season with the Assumption volleyball program. Flanagan accepted a position on Condon’s staff as the Freshmen Head Coach and Varsity Assistant Coach.

Flanagan declined a coaching position with S&S after working closely with Condon during the high school season. Flanagan made a difficult decision to red-shirt his senior season to intern as a club director for Knights Volleyball Club, the Assumption High School feeder program, in an effort to revamp the program.

The S&S (2014) 18s team turned down their bid, but the S&S 16s team went on to finish 5th. There were many players from these teams that went on to have successful careers playing volleyball at the Ju-Co, NAIA, and D3 levels. A total of thirteen players went on to play D1. Those players were:

Also in 2015, Condon was persistent in bringing in Flanagan into the elite club world. Flanagan became extremely interested but also was balancing his senior season academics and athletics. Weller was moving out of the QC and was handing the club over to Condon. After a meeting between Condon and Flanagan, they decided to re-brand the club into Iowa Select Volleyball Club.

In the first year of Iowa Select, it fielded 7 teams, rented court space in Eldridge, IA, and began what has been an incredible journey. Flanagan finished his last season at SAU, losing in the national semifinals to Grand View University, and Condon was now fully involved in only club volleyball.

As it approaches year 8, both Condon and Flanagan still run the club as Co-Directors and look forward to continuing to develop the area’s volleyball players! 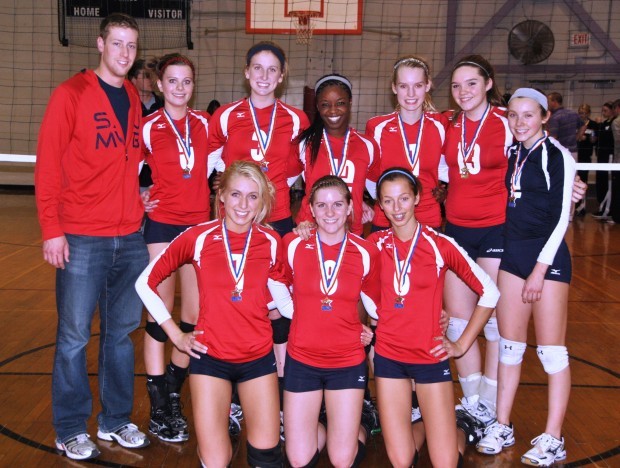 The Stars and Spikes Volleyball Club won first place in the U17 division at the Sports Performance Presidents Day Challenge the weekend of Feb. 18-20 in Schaumburg, Ill. Team members include front row, from left: Erin Mead, Lexi Flynn, Devon O’Connell. Back row, from left: Angela Wagner, Hannah Nimrick, Alyssa Wing, Megan Paustian and Claire Opar. Alyssa Wing was named the tournament’s most valuable player, and Lexi Flynn and Angela Wagner were named to the All-Tournament Team.