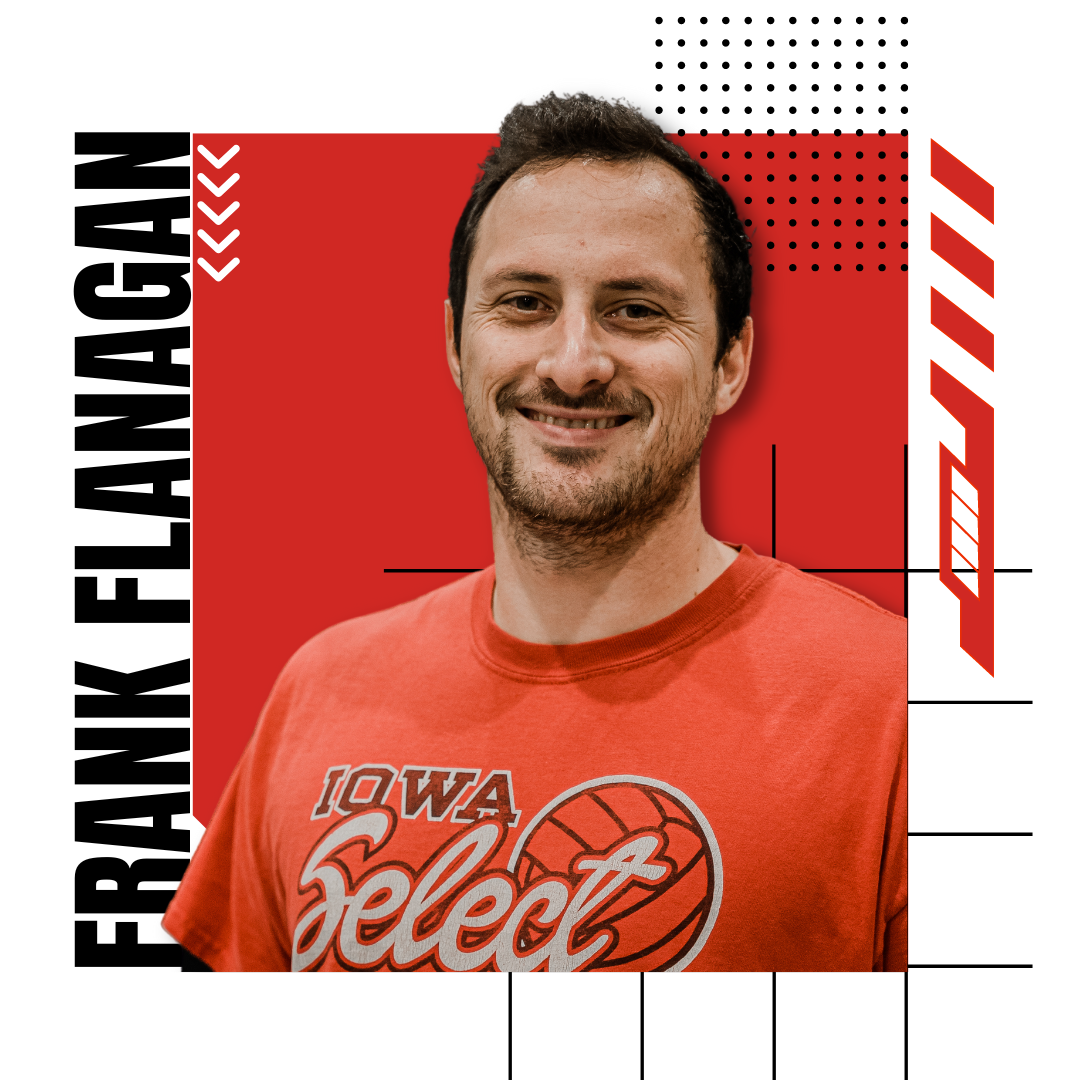 Coach Frank Flanagan enters his 12th season coaching at the club level and will spend his 8th season with Iowa Select as the Director and one of the Co-founders of the organization. Frank was born and raised in southern California where he grew up playing volleyball throughout his childhood and high school years. Frank attended Serra High School (Gardena, CA) where he was a multi-year team MVP and All-Conference award winner. During his high school club career, Frank spent his junior and senior club seasons interning at his volleyball club, Beach Cities Volleyball Club (Manhattan Beach, CA)

Frank went on to compete in the California Junior College system at El Camino College (the only state that has JUCO men's volleyball) and finished his sophomore season leading the state in assists and finished 3rd in digs (among all positions). Frank went on to accept a scholarship at St. Ambrose University under the leadership of Bill Gleeson.

Frank competed at St. Ambrose from 2014-16 seasons, ending his playing career in the final four in 2016. While playing at St. Ambrose Frank spent time as the director of Knights Volleyball Club (a feeder club of Assumption High School) before joining forces with Kyle Condon and creating Iowa Select Volleyball Club in 2015. Frank spent his senior year in college competing at national level while also helping run Iowa Select in its first year.

While leading Iowa Select, Frank is also part of the Iowa High Performance program where he won a gold medal in 2018 with the Iowa Boys team and was the Head Coach of the 2019 and 2022 Girls Select team and has served as an evaluator and camp coach with the program. On top of his involvement with Iowa HP, Frank is also entering his 4th year as an appointed Iowa Region Board member and currently serves as the board's secretary.

"Frank combines a sharp volleyball mind with grit. In my 20 years coaching, Frank is the hardest working athlete I've ever coached. He approaches everything in his life with determination, and a desire to positively impact those around him. Frank is striving for excellence, and mentoring athletes to foster the same growth mindset."

"Having known Frank for almost a decade now, what I believe separates him from others is the consistency he operates within his values. As a teammate, Frank never made any excuses for himself or the team, doing everything he could to add value and grow. It's no surprise he has continued the same attitude and work ethic into his profession. The growth of Iowa Select and volleyball community in the Quad Cities is a direct result of his vision and commitment. Most importantly, he has done this while putting others before himself and doing everything in his power for those around him to succeed."

“In our sport we have so many cool opportunities to meet some pretty outstanding people.  Frank is definitely one of those people.  As a coach our job is to give our players the ability to be successful in any situation and that comes with time, reps and dedication to teaching the GAME of volleyball.  Frank is passionate about teaching the game but even more passionate about seeing players succeed while learning to love this awesome game of volleyball.  He has a great future in front of him and I see great things happening at Iowa Select because of his leadership.”

“Frank was the guy that was the first one in gym and the last one to leave. He was always asking questions and always trying to better himself. More importantly he was a great mentor to the younger players.  Frank has an immense passion for the game of volleyball.”